The Best Electric Bike Batteries: Everything You Need to Know

If an electric bike was a human body, the battery is the heart and soul. It’s what keeps it moving. If the battery is dead or faulty, a cyclist may have a tough time with an e-bike.

Granted, you can still pedal an electric bike without a charged battery, but where’s the fun in that?

Batteries for e-bikes also have a limited shelf life, so you must have a great battery for your rides out on the road.

What are the best batteries for your electric bike?

This article will take an in-depth look at what makes up a battery, the features you should look for, and, of course, which are some of the best out there for your electric bike. Keep on reading

What Should You Look For In A Battery?

These are the terms that you will see when looking at electric bikes and batteries. The chart below breaks down what these terms mean (the actual definition and what it mainly means for the power in your e-bike).

What Types Of Batteries Exist For Electric Bikes?

There are many different types of batteries available for purchase for your e-bike. It all depends on your personal preference for your bike, budget, and performance.

Here is a breakdown of some of the well-known batteries you can get to power your e-bike.

The go-to battery for electric bikes in this day and age tend to be lithium-ion batteries. They don’t weigh too much and also pack a good amount of power in their slim builds.

Lithium-ion batteries are also low maintenance for the cyclist.

There are a few drawbacks, though. These batteries are fragile and require a protection circuit to maintain safe operation. They also tend to die after two or three years.

Sealed lead-acid batteries have been around for over 100 years. These batteries are tolerant of overcharging by cyclists and can deliver very high currents.

These batteries are also cheap and can be easily recycled. So, if you are trying to stay within budget, this may be the battery for you.

However, there are some cons to these. These batteries are heavy and bulky and aren’t able to be charged quickly. They also don’t last as long; the typical cycle life with these is 300-500 cycles.

Lithium-ion polymer batteries are similar to regular lithium-ion in terms of cost, weight, and range.

However, these are also to be molded into different shapes. They don’t have any liquid, either, so they are resistant to overheating. 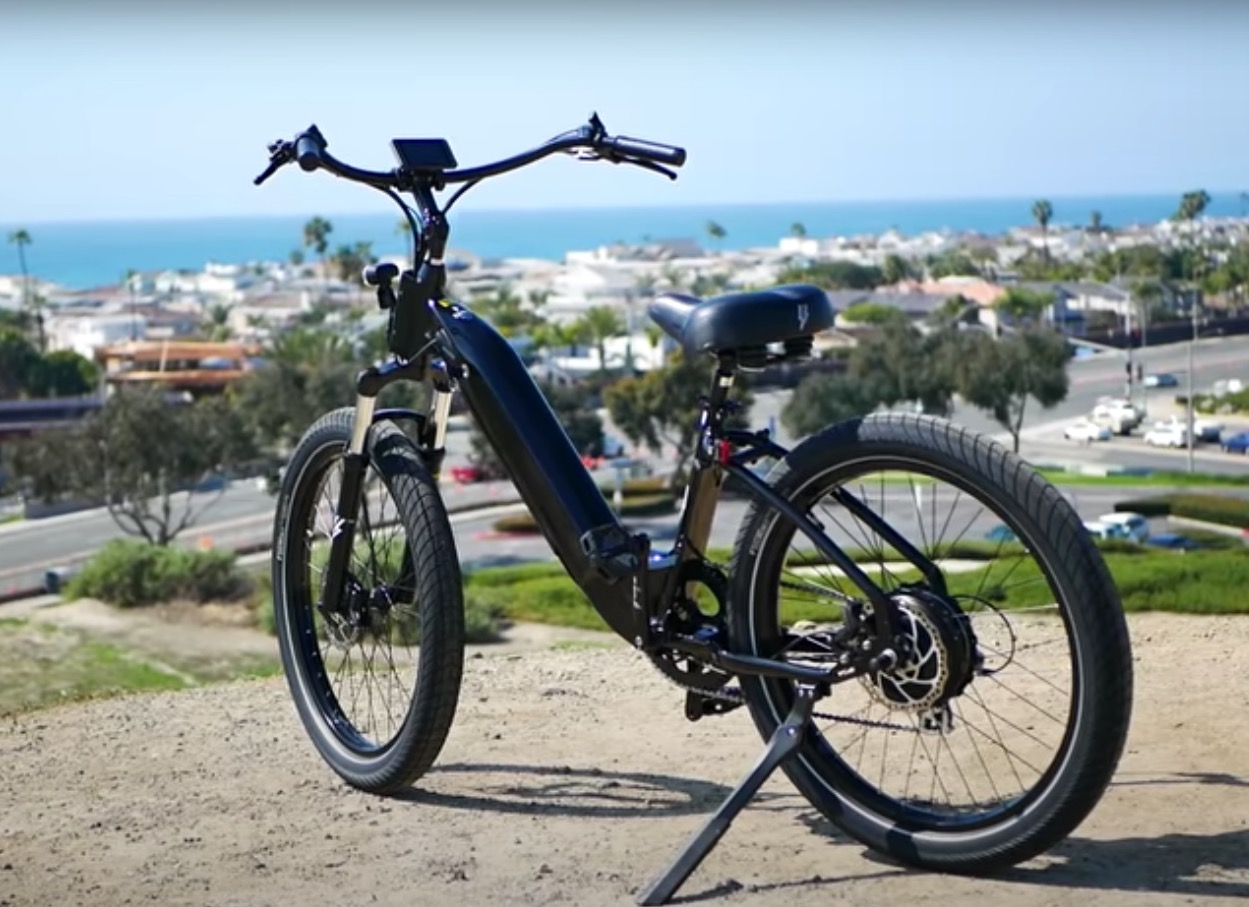 Used a lot in airlines, you will find a fast charge with nickel-cadmium batteries.

However, these also have low power density and a very high self-discharge rate.

These three are different types of lithium batteries with other characteristics that you should know of.

Lithium phosphate batteries take up a lot of weight. However, they have a greater amount of amps than other batteries and will give your electric bike more power and speed.

Lithium cobalt batteries are being produced in high numbers now also. In addition to being used in e-bikes, they are also used in other products like in Teslas and laptops.

Typically, e-bike battery manufacturers chose these over lithium phosphates because they’re lightweight and have double the watt-hours.

What Else Should You Look For In An E-Bike Battery?

Size, weight, and shape certainly come into play. Your battery needs to fit your bike, but it also can’t be too heavy. Otherwise, you’ll have to figure out how to mount it on the e-bike and ride around with it. And, if you have to haul a heavy battery up a flight of stairs, that won’t be good for your back.

Sustainability matters, as well. A battery for your electric bike can be expensive, depending on the specific features. You’ll want to consider reviews from customers to see what battery is more stable and reliable in the long run.

Charge cycles are another factor to consider. They are the number of times you can charge a battery to 0% to 100% in a battery’s lifetime. Each battery only has a certain amount of charge cycles (typically around 1,000 for most of today’s batteries) before they die. Most batteries can get about three years of full charges before you’ll have to replace them.

What Capacity Battery Do You Need?

The batteries on e-bikes have a variety of capacities. Since it’s the most expensive part of the bike to produce, cheaper, lightweight e-bikes tend to have smaller batteries with a smaller range of watt-hours.

Typically, it’s best to get the largest and top-quality battery, which can give you more mile range per charge. 400-500 watt-hours are becoming the norm in the industry as far as manufacturing. However, it depends on the terrain of where you live, the amount of cargo you’re carrying (including your weight).

For a normal ride by yourself on flat ground, you may consider a battery between 250-500 watts. However, if you want a faster ride or plan to carry a child’s seat or pull a trailer, you may want to consider getting more power in your battery.

The best way to know for sure is to do a test ride on a few e-bikes of different power levels to see what you are personally able to ride most comfortably. Be sure to shop in person so that you can ask a salesman questions about the power of a particular bike based on the battery.

Where Is The Battery Placed On An E-Bike?

The placement of the battery depends on multiple factors, including the shape of the bike’s frame.

Many electric city bikes have the battery mounted on the carrier rack in the rear. That works for lighter batteries on lightly loaded bikes that are made for more gentle rides. Having extra weight on a tougher ride, say in the mountains, can affect how a cyclist can handle the bike.

However, e-bike manufacturers are beginning to create more frame-integrated batteries. It can look better that way and give a cyclist better handling as well.

How To Care For Your Battery

Of course, since the battery is what keeps your electric bike moving without putting so much work on yourself, you’ll want to take good care of it. Batteries can last three to five years, depending on how much you use it and how it is maintained.

Store The Battery At Room Temperature

You may be tempted to keep your battery out in extreme weather like during the summer or winter. However, batteries should be kept at around 60 degrees (room temperature), which the standard storing temperature for all types of batteries.

Keeping the battery out in extreme weather will affect the battery power, which affects your bike’s performance on the road. The battery, which always has a limited life anyway, will die even quicker.

Try to store the battery inside when possible.

Use The Proper Tools To Charge Your Battery

Make sure that you use the correct charging kit to charge up your battery. An inappropriate or unapproved charging device could lower the number of cycling charges.

Overcharging the battery after it has already reached full capacity can affect the number of cycling charges as well. Some electric bike experts even suggest keeping the battery charged at only 50-60%. Others say to charge it at 85% at the most.

Taking your e-bike at full speed constantly puts a lot of demand and stress on the motor. The motor is fueled by the battery.

The battery will quickly die if you’re always pushing your bike too hard. So, try to go a little slower while cycling out of the road. That means backing off of the turbo mode that your electric bike may have.

How To Dispose Of Your Battery When It Dies

As previously mentioned, your electric bike’s battery will eventually die. So it’s also best to know how to dispose of it properly.

No, you can’t just throw it in the trash! That’s a danger to the environment due to the risk of toxic gases being released from the battery if it gets damaged. Other ingredients in the battery, like lithium and cobalt, can lead to water pollution and other unintended consequences.

Most times, you can recycle these batteries to be reused for something else. Reach out to your local recycling centers to see if they are capable of using big batteries.

Even big companies like Apple, Target, AT&T, and Verizon have recycling plans and accept batteries from consumers. Recycling organization Call2Recycle may also be able to help.

Feel free to comment below on this article and share it with those you know who would love more facts about electric bikes!

We are so happy to share more information about these batteries and electric bikes in general on our site.

There are other great articles on the site that will help you make the right choices on choosing an e-bike and other accessories.

There are also articles that detail more about batteries, including How Fast Do Electric Bikes Go? or How Far Can An Electric Bike Go On A Single Charge?

The Best Electric Scooters For Under $500

By Ashley Reign
If you’re looking for a fun, eco-friendly way to tackle your daily commute, then an electric scooter may just be the perfect…
Electric ScootersTop Picks

The 4 Best Electric Scooters for Cities

By Kat Dent
Commuting to and from work via the sidewalks is a typical venture for anyone who lives in a city. While some may…
Electric BikesTop Picks

The Best Electric Bikes For Riders Over 6 Feet Tall

By Ashley Reign
As many a rider over 6 feet tall can tell you, finding comfortable electric bikes for tall people is not always an…